In October 2016  I visited the Knitting and Stitching show at Alexandra Palace in the UK. The Knitting and Stitching show is a well known UK craft show.  Oh my goodness it was huge, I haven’t been to the exhibition space at Alexandra palace before so I didn’t really know what to expect.  I have never seen so many stalls with every kind of yarn, material, sewing thread, sewing machines, tapestry kits, quilting kits and more.  Name a soft furnishing craft and it was there, totally amazing!

The trip was mind mindbogglingly overwhelming but fantastic all at the same time. There was just so much to look at it was an information overload. Whilst there were only a few crochet stands, I was a little disappointed that there weren’t more, the crochet kits on sale were brilliant and if you book a couple of weeks in advance you can join classes for a small fee. I love Irish and filet crochet using fine cotton thread and small hooks I like the complicated patterns and uniform finish. As next a step towards lace making  I visited the tatting stand manned by the Ring of Tatters whilst I was there. They had some beautifully intricate items that I could only dream of making.  I did start to learn tatting but started at the wrong time, just before Christmas didn’t give me much spare time to devote to a new hobby.  I still want to learn to Tatt but my focus remains on enhancing my crochet skills and continuing to learn and grow and to design more complex patterns  to share.

In April this year I visited the Knitting and Stitching show at Olympia it wasn’t as big as the Alexandra Palace show so it was much less overwhelming but disappointingly only one crochet stand! Following the few that were at the Alexandra palace show the previous October,  it gave me confirmation that in the UK crochet is still very niche. There was an abundance of quilters stands and some very nice sewing and tapestry stands. What I did enjoy about both shows were the novelty items and new crafts. Felting was big at Olympia, my niece purchased a spinning top to spin her own yarn from raw wool.  She made a very clever tapestry from it.  I purchased two things at the Olympia show, a neat compact pair of scissors perfect to take when you are travelling with crochet and the piece de resistance has to be this beautiful hand died silk and merino.  A 2 ply shank of pure silk and merino loveliness.

You can see it here adorning my dinning room chair.  This was the first time I have purchased a shank rather than a ball of wool. Next time I will definitely pay for the shank to be wound into a ball as  I did get myself in a bit of a pickle winding it to a ball. I managed to salvage most of it from the knotty mess I made.  The picture shows the beautiful colours in all their glory.

As usual I had purchased for the colour and had no idea what to make with it. At 870 yards (795 m) there were lots of options for different projects . I’ve been busy studying different crochet stitches and patterns from a variety of books and magazines. With a view to designing my own patterns.  I’ve only made myself two things in the last year both shawls that are more for autumn and winter than for summer or a light autumn scarf.  When I saw this beautiful shank of hand died silk and wool as an ideal opportunity to make something for me that was a little lighter and multipurpose.  I purchased this from a lady who hand dyes her own yarn Sheep on Mars has an etsy shop you can find it by clicking here Sheep On Mars.  I recommend having a look, the yarn isn’t too expensive and there are some really beautiful colours to choose from.

The scarf took me longer than I expected as, as usual, I have many projects on the go and this took a back seat to completing the design and making the pretty beach huts. This scarf has traveled most of the South West of England as I travel for work it has been the perfect travel companion to distract me when I needed to clear my head.  I have been a little lost for something to keep my hands busy since I finished it.

I found lots of patterns to use this beautiful ball of wool and started two different projects with it, one a solomons knot and one a similar repeating fan pattern but I didn’t like they way the colours showed in them so I frogged (unpicked) them both. If I’ve learnt anything from this make it’s that you need to carefully pick what you make with a variegated yarn.  They are very attractive and enticing to look at as a shank or a ball but they don’t always make something quite as pretty.   Following some further searching I came across a free Ravelry pattern that fitted the bill perfectly.  The pattern is called Lacy Feather and Fan but I think it looks like the sea waves in this pretty hand died yarn. I imagine the sun shining on the waves and giving way to all the pretty colours.  You can find the free pattern by pressing here .

The pattern is a really simple but mightily effective repeating fan, I already have some ideas about how to use it for something for next year in a much thicker yarn.

The trick with this pattern is to keep your stitches even, tension is important.  I did undo it a few times and took it back to redo a few rows because it didn’t look quite right.

I spent a long time blocking it too. You need some patients when pinning it out to pull as far as possible. I’m pleased that it has kept its shape  since I made and blocked it.

This pattern has inspired my own design which is underway as I type watch this space for a pretty winter scarf designed by me.

Hi I'm Amanda, I'm a creator, maker and crochet designer. I love to make and create having fun on the way, come join me and you can have some fun too. View all posts by amandajonescrochet

This site uses Akismet to reduce spam. Learn how your comment data is processed. 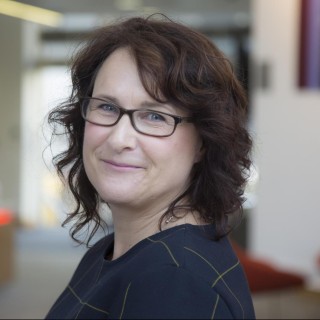 Hi I'm Amanda, I'm a creator, maker and crochet designer. I love to make and create having fun on the way, come join me and you can have some fun too.